I hope each and everyone of you that read this have a very Merry Christmas and a Happy New Year.

I took the family to Gaylord Palms in Orlando this past weekend to see the ICE! experience that they hold each year during the holidays. Because the price has always been so expensive, I have not had the opportunity to see this wonderful exhibit in the past. This year I was able to get a deal through work that was close to half off for all three of us. It was an neat experience and good time well spent with the family.

Since Gaylord Palms claims the temperature is 9 degrees F, I had to pull my winter clothes out of storage that I only wear, maybe, once every five years. And, on top of that they require you to wear a big thermal coat. It’s been, probably, more than twenty years since I’ve been in weather that was below 15 degrees F so my memory is a little foggy on the matter but to me it didn’t feel any colder than 25 degrees.

As you can see from the Photo Gallery and the web site link, the theme this year was Shrek. Not being a Shrek fan it was kind of annoying going through the whole exhibit and seeing nothing but Shrek scenes. My partner and her nephew had visited the exhibit in the past and they stated it was never like this and has been better in the past. For me, I would have definitely enjoyed something like A Charlie Brown Christmas theme or just plain old ice sculptures as seen at the end of the exhibit. But, I can’t complain too much since I hadn’t paid full price.

If you are in the Central Florida area this holiday season and enjoyed the Shrek movies, then this exhibit will be worth the visit. If you are not a Shrek fan, like me, then I would recommend checking it out next year and hope they have something different.

I don’t know why I didn’t add this to my blog years ago but as you can see above I now have a photo gallery page. This photo gallery is made up of albums from my Picasa Web Album.

I believe I may have mentioned before that October is my favorite month of the year and Halloween my favorite holiday. Traditionally, I tend to watch horror movies and classic TV shows that I have grown up watching. I recently purchased the classic Fat Albert Halloween Special and relived the memories just this morning while watching it. I’ll also get around to seeing It’s the Great Pumpkin, Charlie Brown sometime today. Right now, I am about to watch a hidden treasure that not many people have heard of and I just discovered last year; a movie called Trick ‘r Treat from way back in 2007. This movie has been added to a great choice of my yearly Halloween traditions. If you haven’t seen it, check it out. It really is a lot of fun and perfect for the Halloween season.

Here is the trailer

Here is a really cool clip from the movie

Today is New Years Eve and I can’t tell you enough how happy I am the year 2009 is almost over. Be warned that this post will be negative and a little morbid.

The year 2009 was the worst year ever in my 38 years of living, and I am not exaggerating.  Here are just a few things that happened that really made the year pretty horrible: First, the economy sucked so bad that the company I worked for was forced to reduce the hours for all employees, which meant for me that I lost a month of pay spread out over the year. Second, there were a lot of deaths this past year. Along with the numerous celebrity deaths that occurred, I lost my 13 year dog, Roxy,

at the end of September then my Grandmother two weeks later. In addition there were quite a few personal issues in my household that made the year pretty stressful.

But, I can say that there are positives from these tragedies. First, at least I had a job. I have known quite a few people who were unemployed for most of 2009, so I am fortunate to have been employed. Second, even though I will miss my dog and my grandmother, I know that they are not suffering any longer and are in a better place. Finally, I have good health, all my limbs are in good working order and I have a roof over my head. God has been good to me and my family and I don’t take that for granted. I thank Him everyday for all that He has done for me.

Even though the year 2009 was pretty horrible, I am optimistic about 2010 and I look forward to the future and all the adventures it brings.

The year of 2008 was one of the best years I have had in a long time. The reason I state that is because it has been, for the most part, full of excitement. I will admit that the first part of the year was dull; the excitement didn’t actually start until I was released from the company I had been with for over five years. It was just after that when I started a very exciting summer full of trips and thereafter a prosperous autumn.

It began as a trip to New York to act in an off-Broadway play. You can see the entries of those exciting times from archives of the month of July here, here, and here.

Immediately after that, at the end of the month of July, I made a trip to Richmond, VA and Washington D.C.
Then, only a couple weeks later, I made another trip to New York for some leisure time to enjoy the city and some of the tourist areas I had never visited.

Once I returned from my second New York trip is when I resumed my career at a new job working for IBM at Disney’s data center. It was only a couple of months before I realized that job was not suited for me.
The remaining year was filled with new tech gadgets, catching up with old friends after making a trip to Tampa for Halloween (pictures here and here) and a trip to Tallahassee for a FSU football game (picture here and here), and then, of course, the holidays.

It seemed halting my career in the first half of the year was a life changing event. Since then I’ve started a second job that has already proven unstable, so there is no telling what 2009 will hold. I hope 2009 is just as adventurous but a little more stable. It is true what some state though, that chaos is exciting and 2008 sure was an unstable and fun year for me.

Seeing the Osborne Lights at Disney’s Hollywood Studios each year has become a holiday tradition for my household.

Here is a video I recorded from last night’s visit using my fabulous Flip Mino. One good thing for me that helped enforce the holiday cheer is that it was actually cold last night; cold enough to even drink hot chocolate while watching the spectacle.

As we all know, today is Thanksgiving. I want to wish everyone and their family a safe and Happy Thanksgiving.

Unfortunately for me, I will be spending it in bed this year. I’ve been sick with a cold since last Friday however, since Monday, I have gotten worse; I may have the flu. Even though the health benefits at the new job do not kick in until after the first of the year, I had no choice but to call in sick on Tuesday and Wednesday. I was even supposed to drive up to St. Augustine Wednesday evening to be with the family for Thanksgiving day then drive to Alabama to be with my Grandma on Friday and Saturday but I just couldn’t get healthy enough quickly enough.

However, despite this current grief, I have so much to thank God for. I may be sick now but I still am in good health. We may be in an economic downslope but I have a job. I have a loving family and good friends. And I have so much more. Like I stated, I have a lot to be thankful for. 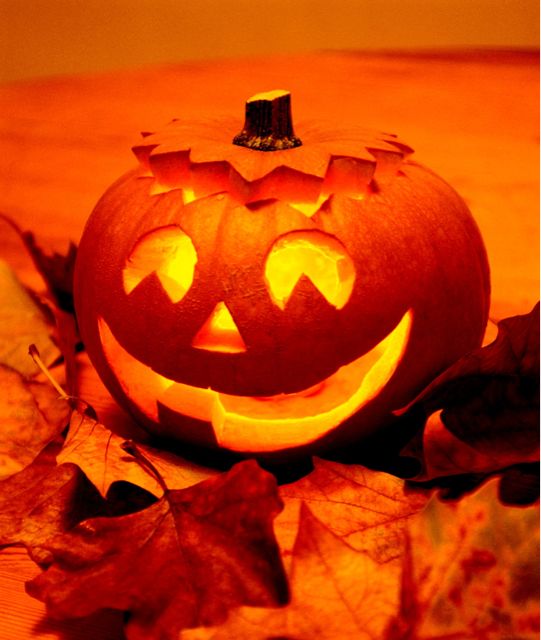 I’m pumped. It’s autumn. My favorite time of the year. Now that it’s autumn, that means cooler weather is getting closer and Halloween is almost here.

Screw Christmas. Halloween is my favorite holiday and the most wonderful time of the year.